Unicorns are a very rare species of creature... Though many humans are working hard to keep them alive, it is still a challenge.  Listed below are many descriptions of the best known unicorns on earth. There are two main groups of unicorns: Dark Unicorns and Bright Unicorns.  Dark Unicorns are pure evil.  Bright unicorns are the opposite.

This button has no purpose!!
Click here to vote on your favorite Unicorn! 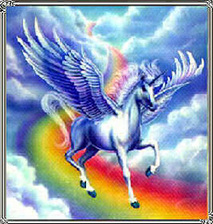 There is one kind of unicorn that can fly, and it has wings and a horn. It is called a pegasus. They look like a normal bright unicorn only with wings. Their powers are to help all creatures. Whenever one of these unicorns is near you you will feel amazing! So if an animal of any kind is hurt or feels bad they will try to come by and help them to feel better. No one is exactly sure of where to find them, but they always seem to come save lives just when you need them! 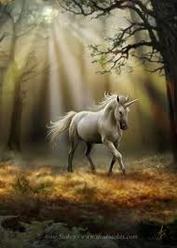 Ruva is a fairly common type of unicorn that everyone seems to forget about These are some of the most classic unicorns--they come in mostly natural or pale, pastel-y colors, and live in meadows all across the world. They have a very special thing with flowers that no one really understands. They are commonly called "flower unicorns" because of it. They are the most similar unicorn to horses, by looks, and by having the faintest magical powers. They eat greens just like horses. 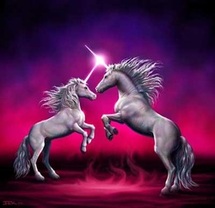 One good kind of unicorn is the magi-corns. Magi corns live in abandoned fields left behind by farmers and human tribes. They eat the grass and crops. They have the most magic powers a unicorn could ever have. They use all of there powers for good and stick together in pairs of two. They do this because if for some reason they needed to make a huge wave of energy and magic to protect themselves, they could put there horns together and create the biggest pulse of power in the world! 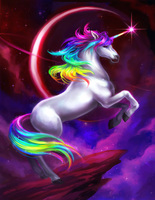 Probably the most common unicorn in the world is a rainbow unicorn. A rainbow unicorn has a rainbow mane and has magical powers that let it change the weather. They are a good unicorn unit and do know harm. This species can be found in any humid, isolated places all around the world. Their main food resource is magical spring water and elodea.

Feathered unicorns are one of the most rare species of unicorn--the last one was spotted over 19 years ago, and proof of their existence today is unsure still. There are estimated to be between 20-50 left on the planet, mostly in northern America. Their diet consists of featherbursts, a very magical plant only edible to feather unicorns--if any other creature tries to eat it, it is deadly poisonous.  These unicorns are closely related to birds, and have beautiful long wings. This picture here is just a model example of what the feathers of these unicorns might look like. 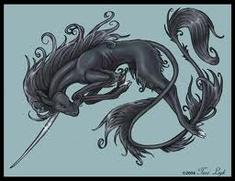 legend has it that straighthorn unicorns are horses mated with narwhals. Like their supposed ancestors, straighthorns are incredibly agile, and have adapted to living by the water. This species must be the most distant species from other interactions with any other unicorns or creatures alike, and live mostly on far away frosty islands. To learn more about them read the blog post tiled The dawn of Unicorns, on our blog page, where these unicorns are featured. 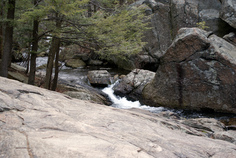 These unicorns are just your classic unicorns. One day a small group of "old-fashioned" (as some call these plain white unicorns), were grazing in a meadow. All of a sudden something fell from a tree above. It was soft and feathery, and when they peeled off the feathers a sweet smelling thick, yellow liquid oozed out. Featherbursts. As you may have learned from reading the descriptions of feathered unicorns, this fruit can be incredibly dangerous to those other than feather unicorns. But when the unicorns ate it, they did not die or become sick--they became invisible!  These unicorns live their live just as they did before eating the fruit, but now they are just invisible!! This picture here is of a mother unicorn and her baby by a stream. 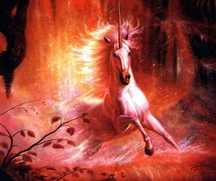 Ember unicorns primarily live in hot, dry places, such as deserts or even volcanoes. They eat lava beetles which are gross little bugs that can only be seen by magical creatures. They sound bad but to the creatures they are really good an yummy. 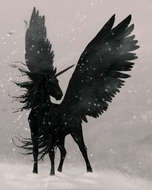 This unicorn is the same as a bright pegasus only evil..... They have really strong powers and attack bright unicorns all the time just for its own evil reasons.. They also have magical powers that tell them where bright unicorns are. It is called a Dark Wing. 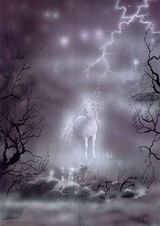 This kind of unicorn is the most powerful out of all of the dark unicorns. They are incredibly dangerous because they can change what they look like. They are called changeable horns. They can change to ANY kind of unicorn. They look the same as a dark rider but when they start to change no one knows........... What they eat depends on the shape that they are taking at that time. 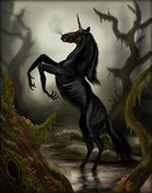 There are a few kinds of dark unicorns, one kind is called dark riders. Dark riders have evil powers and attack bright unicorns. They look scary with plainly colored fur. They should have a dark main and clearly colored eyes. When this kind of unicorn attacks bright unicorns they take food, water and bright unicorns magical powers for themselves. DO NOT TRUST THIS UNICORN!!! IF YOU EVER SEE ONE JUST RUN!!! DON'T STOP TO TAKE A PICTURE OR FIX YOUR HAIR OR TRY TO BEFRIEND IT OR TIE YOUR SHOES, JUST GO!!!!!! I AM TALKING ABOUT LIFE AND DEATH HERE!!!!!!!! 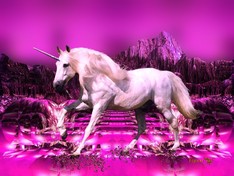 Jewel Unicorns live on huge mountains all over the world. The foods they eat are jewels such as diamonds, rubies, emeralds
etc... They live on mountains so that they can magically hit the rock using their magical powers and find the treasure inside. By doing this they make a cave. Once they make a cave they move far away and hope no wizard will find them. Now you may be thinking how are they bad? They are bad because they blind people or unicorns with powers. They do this because they think if anything sees there jewels they will want them and take them.

These unicorns are very beautiful unicorns--in fact, they are so beautiful, we cannot even put a real picture of one on here, because you would be blinded by its beauty, so instead we will show you a picture of one of it's ancestors, the Semi-Beauty unicorn. Oh, and also, these unicorns are the MOST DANGEROUS SPECIES OF UNICORN ON EARTH!!!!!!!!! They have entirely good intentions, however, just one little glance at them could cause paralization, blindness, lifelong trauma, OR DEATH!!!!!!!